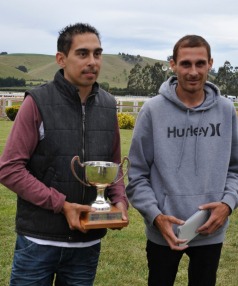 04 December 2016
By Tayler Strong
The Abernethys dominated the brothers in arms drivers series at Oamaru on Saturday with Sailesh winning three of the six heats and Jay winning one.
The brothers, aged 31 (Sailesh) and Jay (33) ended the series with 19 points, three  more than nearest rivals, Nathan and Matthew Williamson with David and Philip Butcher in third place with 12 points. The Abernethys won the series on the grass track in 2014 when contesting it for the first time.
The Abernethys received a $1000 cash prize provided by Fat Sally’s Pub and Restaurant and a trophy sponsored by Ballantynes Showcase Jewellers.
The Abernethys who operate a stable at Papakura are on the move. They have bought a larger property at Hunua, 35 km away and plan to shift in before the winter.
“The new property is 70 acres against 20 at our present place. We will have straight line and oval tracks and transfer our hydro treadmill,’’ said Jay.
Last season was the most successful for the stable with 33 wins.
“We are building up a team again as most of our older horses have moved on.”
Sailesh won on Saturday with McLovin, Veneto and Nui Toc Tien. Veneto is unbeaten in three starts on grass and Nui Toc Tien has had his four wins on grass. Jay won with Soney Beatt, who made the pace and cleared out by five and three quarter lengths. Soney Beatt has gained four of his six wins on grass.
Trainer Ken Ford had left him in the care of the Williamson stable at Oamaru after he raced at Invercargill the previous Sunday.
Trainer Ray Jenkins produced the trotters McLovin and Justmollyarcher to win. McLovin has won twice from four starts. Justmollyarcher was having his fifth start when he cleared maiden ranks. Both 4-year-olds led over the last 1500m of 2000m.
McLovin is by Monarchy from Winfield Invasion, an Armbro Invasion mare who won four races. McLovin is raced by Jenkins with Terrence Kean, of Winton, Morrell Lake, of Melbourne, Shelley Jenkins (daughter of the trainer) and Neville McRae, of Hamilton. McLovin was bred by Daryl and Anne Trainor, of Sawyers Bay, who sold him in April when he was in work with Mark Jones. The Trainors have Say You Pres, a 3-year-old filly by The Pres from Winfield Invasion shaping well with Jones.
Invercargill owners Leo and Genevieve Curtin, who are attending the Interdominion in Perth, race Justamollyarcher. The Curtins  bought Justamollyarcher from Greg Payne as a 3-year-old 12 months ago.
“He has got heaps of ability but needs the ringcraft,’’ said Jenkins of the son of Angus Hall and Justa Kiwi Girl, who won nine races. The Curtins won seven races with Buddsun from the Jenkins stable.
Culley Backy made an immediate winning return for Christchurch owner Peter McDermott. He bought  5yr-old out of the stable of Michael Heenan and Culley Backy was transferred to Brent White at Temuka.
“I can’t take much of the credit I have only had him (Culley Backy) a week,’’ said White.
The Central Courage syndicate were out in force to see their 4-year-old mare Seduce Me clear maiden ranks. Members were urging her on by her stable name, Cindy, rather than attracting  strange looks by yelling her official name. Roxburgh trainer Geoff Knight bought Seduce Me (Ohoka Arizona – Lady Bo Heather) from Glenys Chmiel and Zenmach from Mark Smolenski for the syndicate about the same time in the winter of last year. Zenmach has since six races.