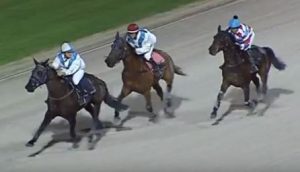 21 August 2017 by Duane Ranger
Papakura conditioner Jay Abernethy is yet to open his account in 2017-2018 despite training a quinella at Cambridge Raceway last Thursday.
The 33-year-old trained Meander With Pegasus and Way To Go to run first and second in the second Monte Saddle Trot held at Cambridge Raceway.
Meander In Pegasus, who was ridden by Abernethy’s partner, Lisa Olsson, won by three-and-three-quarter lengths. Way To Go and Riina Maattanen had eight-and-a-quarter lengths to spare over the Michelle Wallis and Bernie Hackett trained Makarewa Jake, who was third.
The only other starter was the Jo Stevens trained The Scruff who was another 27 lengths away in fourth. They were the only starters.
Meander With Pegasus started from the 30m back mark and trotted the 2200m in 3:17.6 (mile rate 2:24.5) and came home in 65.4 and 31.9.
“I really love the Montes. Most of ours are ridden in training anyway and it’s a good way to keep them fit. Old Silver Steam was always ridden and he won 21 races.
“Michelle and Bernie are big advocates of it and so am I. Their horses have won Montes and then gone on to win on race night. It’s good for the game,” Abernethy said.
“It’s something new and that has to be good for the industry. It gives horses another ‘out’ when they have reached their mark,” he added.
Abernethy, who recently won Harness Racing New Zealand’s ‘Stable Shout’ and earlier in the year was crowned New Zealand’s ‘Gearing Up Champion’, said he wanted to get more people involved in Montes.
“We will be having a meeting at Pukekohe on September 16, before the Workouts to make people more aware of saddle trotting. There will be a stipe there who could even tweak the rules a bit for us. If it is going to make it easier for those interested.
“Jockeys only have to have one Monte ride to be eligible and stablehands, three. We also want to make trainers more aware of what the requirements are.
“My partner used to ride them back in Sweden and has ridden Montes at Pirongia for the last four or five years,” Abernethy said.
He said there would be more Montes at Cambridge Raceway and Alexandra Park.
“The Auckland Club has indicated it would like to run a non-tote Monte Series later in the season. That is promising but we have to be aware that Corporate Racing and Kidz Kartz are also staged on the track,” he said.
He also said the proposed exhibition Monte at New Plymouth on September 30, would also prove popular.
“Race-day jockeys will ride them that day, so that will be a great innovation and hopefully get more people interested.
“We see this as a breath of fresh air for harness racing and want as many people as possible to become involved. We just have to go through some of the rules and regulations to get it up and running smoothly,” Abernethy said.
Cambridge Raceway’s first Monte Saddle Trot was run on July 16.
That 2200m event attracted six entries with Commander Paris (Catherine Cameron) winning by a large margin from Makarewa Jake (Riina Maattanen), and Majestic Ali and Tyla Hackett third.
All three were trained by Wallis and Hackett.
Twelve days after his Monte win, Commander Paris and Todd Mitchell won a $14,999 trot at Alexandra Park. That was the seven-year-old CR Commando gelding’s eighth TAB win.
He has since finished second at the same venue.