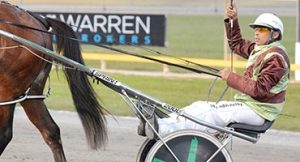 A busy couple of weeks has ended in the best possible fashion for Jay Abernethy.

The Auckland horseman has campaigned a team on the grass track circuit over the holiday period, including Westport, Reefton, Tauherenikau, and finally Otaki on Monday, where he won four of the five races on the dual-code card.

He started off the day reining home the Adrienne Matthews-trained Alta Madeira to win the Wallace Construction Mobile Pace (2000m) by a neck, before he was back in the winner’s circle two races later with his own horse, Adieu Flirt, who took out The Anchorage Bed And Breakfast Waitarere Beach Mobile Pace (2000m).

“Adieu Flirt has been racing well,” Abernethy said. “She went one bad race down at Westport and in all of her other races she went quite good.

“We were quite pleased with the way that she improved each time and she happened to win on the day where the stakes were the biggest, which was really good.”

Abernethy recorded another win as a trainer when Jacob Wallace drove Maria Kirilenko to a neck victory in the Grant Plumbing Mobile Pace (2000m).Abernethy bred and co-owns the daughter of Sportswriter with local trainer Eddie Phelan, and Abernethy was delighted to get the win with his close friend on his home track.

“Eddie and I race and breed a few,” Abernethy said. “She got beaten a nose there last year, so it was quite good to get the win there today on his (Phelan’s) home track.

“It was a weakish field, so with the right run she was always a chance to get some of it. The way the race panned out, it suited her right to the ground.”

Abernethy rounded out the day in the cart, winning the Boundary/Deans & Associates Otaki Cup (2000m) with the Doug Gale-trained American Me.

“Doug usually gives me first choice on all of his horses unless I have got something of my own in,” Abernethy said. “I have won this race a few times as a driver, and a couple of times with Doug as well.

“It’s always good to win for Doug and his owners.”

Abernethy has been one of the biggest supporters of the Central Districts and grass track racing and he said it is a good change in scenery for his team.

“You can place the horses a little bit easier,” Abernethy said. “Some horses that have been struggling a little bit at Auckland and Cambridge, they grow a leg in the Central Districts.

“These have been our only grass track meetings in the North Island for the season, so hopefully next season we can get a few more grass tracks.”

Abernethy is looking forward to getting home after a long couple of weeks, but he is already contemplating his next southern assault with his team.

“These ones are all going home now,” Abernethy said. “We did think about Nelson, but it will be good to get home tonight.

“I may still send some down to Blenheim, I will just see how they come through this run.”