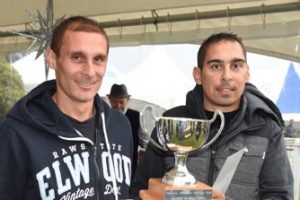 22 December 2016
By Duane Ranger
The race to 150 could be resolved at Alexandra Park tonight (Thursday).
Fresh from their victory in their ‘Brothers in Arms Driving Series’ at Oamaru earlier this month, the South Auckland-based Abernethy brothers will do battle again on their home track tonight – but this time against one another.
Both Jay (33) and Sailesh Abernethy (31) sit on 149 victories – Jay for training, and his younger brother for driving.
“We’ve always had the usual sibling rivalry growing up but nothing to any great extent. I would like to get to 150 first though. I am the older one and it’s only right,” he joked.
“Any other time I don’t mind running second to Sailesh and vice versa. We are a team and try and do what’s best for the stable and the owners and trainers,” he added.
Since 2006-2007 Jay has driven 149 winners from 1664 starters to the races. he’s also placed 266 times for $986,052. UDR strike-rate: 0.1597.
Compare that to Sailesh who has driven 149 winners from 1,364 starters since 2009-2010. he’s also placed 268 times and banked $1,016,777 in stakes. UDR: 0.1980.
Of course Jay is the senior driver having saluted the judge 427 times from 4.596 drives since 2002. he’s also placed 815 times and won just over $3.2m i stakes. UDR: 0.1722.
The older sibling gets two bites at the cherry tonight. The leading trainer at Cambridge Raceway last season will line up Kate Jackson (Trent Lethaby) and Collection (Jacob Wallace) in the opening junior driving event.
He will then sit behind the Adrienne Matthews trained Jude’s Gem (13) in the fourth event, while Sailesh’s only drive is behind the Cheree Wigg trained Minstrel Boy (2) in the fifth event.
“I can’t separate the two from our stable in the first race. The only indication I can give you is that Trent (Lethaby), who woks for us, had the choice of drives. I think it will come down to who gets the best trip,” Abernethy said.
“Both can win with luck,” he added.
He thought he had a better winning show behind 3-year-old Art Official filly, Jude’s Gem, despite drawing five on the second line.
“She went real good first up and I’m sure Adrienne will have her screwed right down for this. Sure it’s a stronger field than what she met here last month but she’s on the improve, and she did go pretty good at the Workouts (fifth) on Saturday.
“This is just her third career start so whatever she does she will be improved by the run. I think she will be a nice drive,” Abernethy said.
Abernethy said if he or his brother were left on 149 after tonight’s meeting it was likely one of them would hit the 150 mark at Waipa on the Te Awamutu grass next Wednesday.
“We will have five or six in at that meeting so surely one of us will break through,” he said.
Meanwhile drivers at Alexandra Park tonight will wear black arm bands in race four – the $12,000 NZ Trotting Hall Of Fame Len Hart Memorial Maiden Pace as a mark of respect for the passing last week of Riverton jockey Rebecca Black.